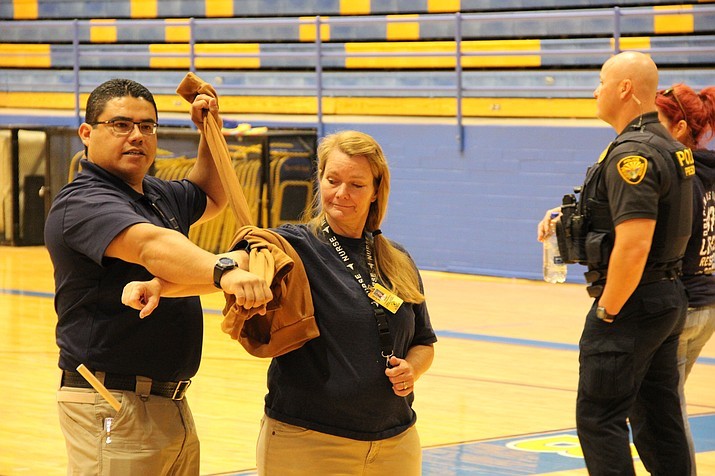 There are now over 450 more people in the Prescott community who know how to effectively stop someone from bleeding out during a medical emergency.

On Monday, Sept. 23, every Prescott Unified School District employee went through a crash course in bleeding control.
The training program, known as Stop the Bleed, was offered by ICSAVE (Integrated Community Solution to Active Violence Events). The Arizona-based charitable foundation’s mission is to protect communities from preventable injury and death through education, preparedness training and community outreach programs.

PUSD superintendent Joe Howard heard about Stop the Bleed last spring when nurses presented on it during a Yavapai County school administrators meeting.

“The story that they told was that a little girl had fallen down and had a compound fracture and was bleeding badly, and the nurse at that school knew how to handle it,” Howard said. “The point there is that all of us being around kids, there could be a situation where we save a life.” 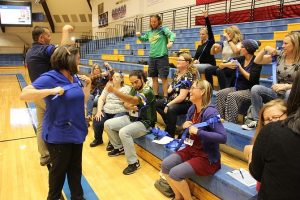 Stop The Bleed was created by medical professionals and government officials after the Sandy Hook massacre in Connecticut in 2012 as a way to increase survival rates after mass casualty events. But knowing how to stop someone – or yourself – from losing too much blood goes well beyond mass shootings.

“It applies to all levels of trauma,” said Matthew Reese, a paramedic/engineer with the Prescott Fire Department and an active member of ICSAVE. “You get in a car accident; you put your arm through a piece of glass; you break your arm bad enough to cause bleeding out; it’s not just those situations where a bad guy comes in and starts shooting people up.”

Though having certain first aid equipment on hand, such as high-quality tourniquets and gauze, is preferred for these techniques, much of it can be done with whatever items are immediately available to the person trying to render aid.
For instance, a makeshift tourniquet can be fashioned using items as common as a piece of clothing and a rigid object, such as a wooden ruler, broom handle or crowbar.

“You need, A, something to do the banding, and, B, a windless,” said Ramon Proa, a Fort Mohave Mesa Fire paramedic and member of ICSAVE who helped with the training on Monday.  A common misconception that was addressed during the course is that there’s a risk of losing a limb when a tourniquet is applied due to a lack of blood flow. Proa and the other instructors said this is simply not true.

“Members of our military have had tourniquets on for over two days at times without issue,” Proa said.  However, if too thin of a bandage is used, then nerve damage is possible. “You want something that is at least two inches in width at a minimum,” Reese said.

Teachers going through the training expressed gratitude in having the opportunity to expand their first aid skills.
“I felt like it was super helpful, especially for teachers who don’t have any training in the medical field,” said Josiah Ramirez, an 8th grade social studies teacher at Mile High Middle School.

For Christina Jones, a 7th grade social studies teacher at Mile High Middle School, the training was a bit of a reality check.
“It’s sad, but I guess we have to know this now,” she said.

PUSD is not the only local school district to conduct districtwide training on how to stop someone from bleeding out.
Last year, Chino Valley School District (CVSD) hosted a similar training session for its staff.
“It was provided through the Chino Valley Police Foundation,” CVSD Superintendent John Scholl said.

Humboldt Unified School District, on the other hand, has not taken any such action.
“We currently do not have any plans to utilize the program,” HUSD superintendent Dan Streeter said in regard to Stop the Bleed.

An effort in both PUSD and CVSD is to acquire additional first aid equipment meant for stopping traumatic hemorrhaging.
“There is a cost to that, so we’re weighing out ideas,” Howard said. “Ideally you’d want it in every classroom, but we’re in no position to do that.”  Howard said PUSD is going to start pushing for grants to fund the purchase of additional equipment, and welcomes any other form of community support.  “We’re certainly open to partner with community members who are interested in supporting this effort,” Howard said.